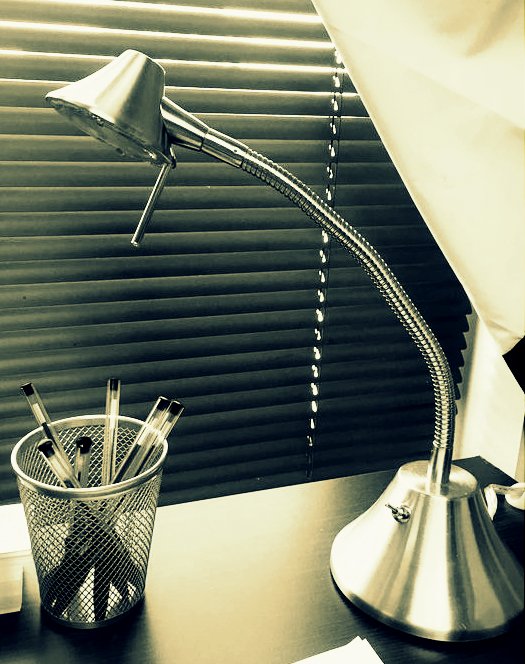 There once was a lamp who could bend in any direction. He originally thought of this as a blessing. But with so many decisions in life, he could never decide which direction to go. Should he look to the curtains? Or should he look to the sky? He turned to everyone for advice.

“What are you looking at the coffee maker for?” A ball point pen asked one day.

The lamp continued to stare vacantly into the eyes of a Cusinart. Maybe he was heading in the wrong direction. The lamp turned its metal spine against the coffee maker.

“Where should I look?” He asked the pen.

“Why don’t you look out the window. That’s where all the happenings are going on,” he pointed his cap to the outside world.

Once again, the lamp shifted its position. Now he could see the ocean. Its waves lapped at the sand, reminding him of a large golden retriever lapping at a dish of water. The lamp hated retrievers. They were too obedient and had such little mind of their own. What if their owners told the dog to sic him? He had no doubt the dog would do it. How could someone be so blind?

The lamp beamed down at the water, content to see its steady pull and push throughout the earth. The lamp began to wonder about the fish and the sharks and the whales that lurked beneath. There was a whole other world, with different organisms and different choices to wade through. The ocean was always changing. Like all of the people, it breathed in and out, never content to stay in one place. The very enormity of change seemed impossible for the lamp to grasp.

“No, no,” a picture frame called out from the other direction. “You don’t want to see the ocean. It’s too big. If you stare at it for too long, you’ll go blind – losing yourself to the vastness of life. You want to stare at me. I’ll never overwhelm you.”

Once again, the lamp changed positions. It now stared at a silver frame with a small child sitting on a miniature sized wooden chair. The chair was made for small children.The picture frame was also small. It was no bigger than the palm of a human’s hand. The photograph – even smaller. Although the details of the picture were pretty and well defined, the lamp knew that his view was too cramped.

“But if I look at the picture, my world is too small,” the lamp protested.

The pen and the picture frame looked at one another and shrugged. “There’s nothing we can tell you,” they said in unison.