“No. YOU push and I’LL pull,” the brass knob said to the silver. They had been yelling all night which was really no different than what they had been doing their whole life. The in and out and black and white and push and pull of their life had become routine. This argument would have been no different if it hadn’t concerned the little boy.

The little boy came to their house once every year around the holidays and would treat their door terribly. He would pull or push at their knobs until the spare guest room door was swung open with such a force, it shook the door frame. He was a brat of a boy, only seven but with an anger and a fire that tore up the house in the flash of an eye. The door knobs had been expecting him ever since they could smell the sweet smell of pine from the Christmas tree.

“Damn it. I don’t want to argue with you again,” the brass knob yelled to the silver. Of course, this wasn’t the case at all. He lived to argue. When she turned one way, he twisted the opposite and when he moved in one direction she would counter him perfectly.

“Then don’t argue, and just push.”

“He’s going to push on your knob before he reaches mine.” The brass knob said. “If you don’t push, then you’ll mess up the whole door.”

In addition to the little boy having a temper, he was also left handed. This made the entire house creak and groan with every different twist and turn he made. The silver knob was not giving up though. Instead, she insisted on staying put. She was not pushing nor pulling in any different direction.

During the evening at around five p.m. the door knobs heard the little boy run into the house. His shouts and cries for his mother echoed across his grandmothers house endlessly. With a force as fierce as a cannon he ran up the stairs and toward the guest room.

“Brace yourself,” the brass knob said to the silver.

“Oh hush,” she said. But when the little boy grabbed the silver knob, he twisted harshly and pulled to the left. The silver knob held tight to her position. She was never very good with change and insisted that she could only move in one direction. With a terrible clunk, the little boy pulled the silver knob so hard that she popped off the guest bedroom door. Her body fell from his small hand and she landed with a clang on the hard wood floor.

Having no one left to push and pull with, the brass knob teetered to the left and then to the right. When he could find no balance, he too crashed to the floor. With a loud thud, he landed exactly on the opposite side of the door. 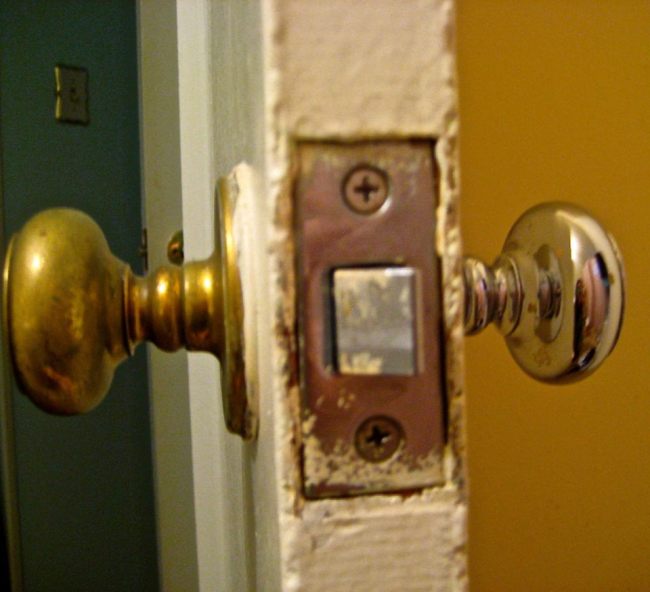 15 thoughts on “The Door Knobs”