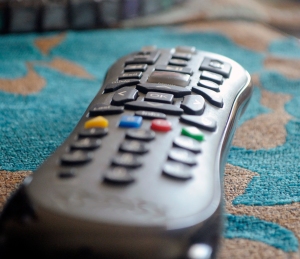 “What is your idea of perfect happiness?” A wiry game show host sits on a couch in a staged living room. He holds his microphone out, hoping to record everything.

The tv remote blinks. Flashes of green scan the room for any chance of reception. He wants control. He wants excitement. He never wants to feel that shrug of indifference that comes with the heavy sigh of boredom. But how can he say his idea of happiness is to be able to change scenes at the click of a button? Where is his loyalty?

He remembers the night he was so enamoured with Paris Hilton. Her long, delicate legs had stepped out of the limo, one at a time, so gracefully. Her skirt glimmered from the bright lights of the paparazzi. She was so glamorous. How could he not watch her every night for weeks as she graced his presence on the tv? She was perfect.

And then there was that one day. He took one quick look at her long blond hair and knew that it was over. Maybe it was the way she smiled – so quiet and distant. Or maybe it was that he knew every move she would make ahead of time. Whatever it was, he didn’t feel the same way about her as he once did. Her face looked old and in that familiar way, he felt the pull to change. He needed something new. Something exciting. He changed the channel.

The tv remote stared straight into the announcers eyes and said, without blinking, “the ability to change.”